In 1994 Seattle Tarp Company was asked to help solve a large weather protection problem for the Kingdome re-roof project (The Kingdome was a domed stadium located in Seattle with a capacity of 75,000). With the start date of late August and a projected schedule that would have the project lasting until early spring several glaring problems came to the top. The first thing was the fact that the 7 layer roofing system that was being applied is very weather sensitive. There could be no moisture present during the application of the roof system. The Seattle area’s wet season being October through the beginning of summer was the main concern.

In addition to this, the fact that the roof area being 9 acres presented the other glaring challenge. Making this even more improbable was the fact that there was still many Seattle Mariners games to be played, dozens of events from Christmas bazaars to monster truck shows, In addition to a complete NFL season for the Seahawks, all the while the roof having the repairs being performed. Although the project got off to a slow start, by the time the rains came STC had provided 11 air-inflated tents that were secured to the outer ribs and moved from rib to rib as the project moved to completion.

With a support crew of Iron workers, a gifted crane operator and of course a large “Horse crane” STC flew the tents and secured them into position all the while maintaining them and improving the performance as they went. Using the already heated air from the Kingdome interior the tents were pumped to 1-1/2 pounds of static pressure allowing the tents to maintain strength and integrity through windstorms that produced 60 mph winds. The tents performed through the entire project resisting snow, sleet, and of course lots and lots of rain.

On September 8th 2006, The United States of America Exhibit at the la Biennale di Venezia was introduced to the Press. The title of the exhibit is “After the Flood.” The exhibit looks at the past and present New Orleans. Taking into account past flooding and the current state of New Orleans after Katrina. In the exhibit you will see statistical accounts on all the floods that have occurred in New Orleans over the past 100 years. The impact on demographics and economic repercussions. The exhibit also includes a photographic account of Katrina, a video account of the event by a photographer that lived through the event. It also gives us a look at different architectural designs for living in areas prone to flooding. Anderson and Anderson designed a prototype bladder system that could be used to prevent flooding. Seattle Tarp Company built the Bladder and Seattle Textile and Seamans Corporation provided the fabric. The bladder is the corner stone of the United States Exhibit at the Biennale. You can see pictures of the bladder below.

The exhibit opens to the public on Sunday September 10th and will be open for the next two months. The display will then move back to the United States and will tour the country.

For more information on this type of project, please contact Seattle Tarp Company. 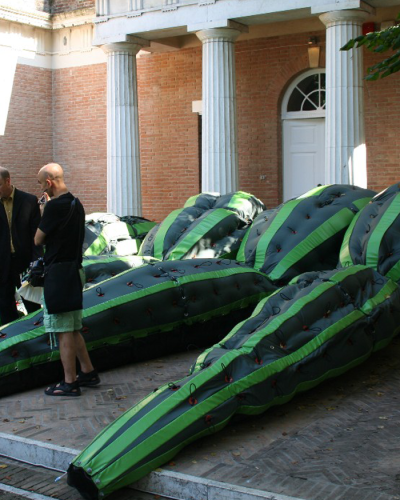 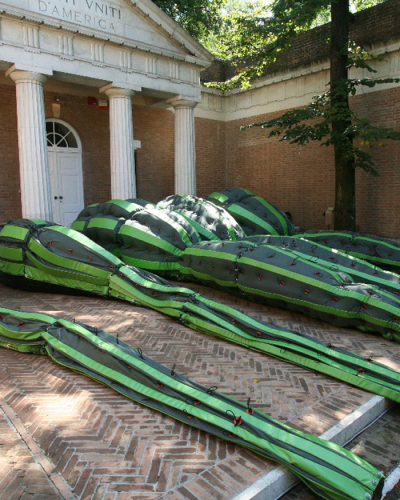 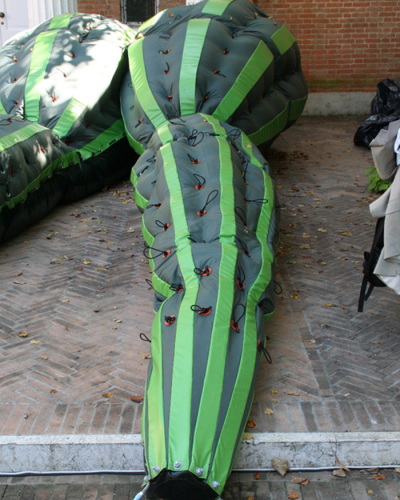 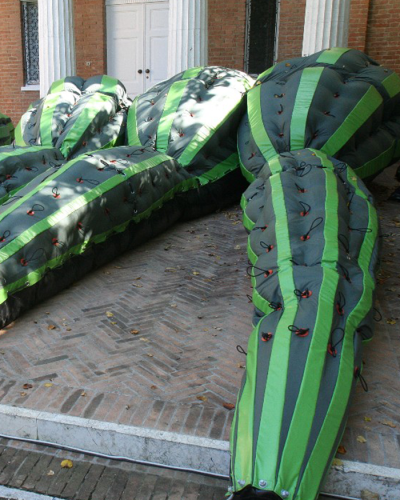 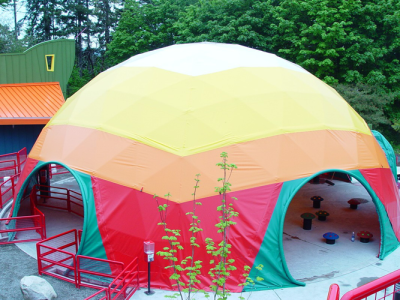 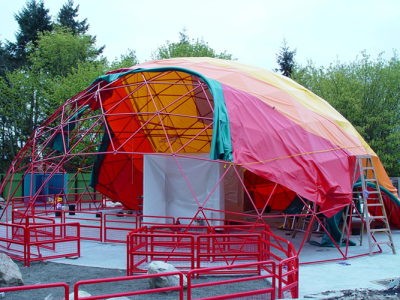 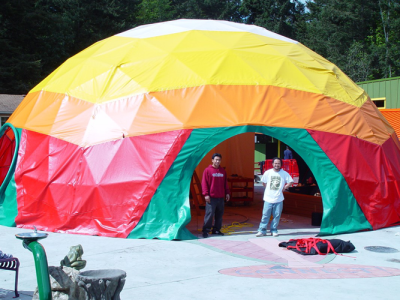 The Point Defiance Zoo looked to Seattle Tarp for custom architectural products for some of their exciting new facilities.

Shown in the photos here is installation of the covered petting zoo. Here you can comfortably escape the elements and watch your children feed the goats.